Boynton to Boca – A Dozen Bands At Least Tonight!

Wow – 12 bands to pick from in South County!  Can you get to them all?

You can stat off at Elmo’s in Boynton with Downtown (Rock) and head to Delray where you can catch Slip and the Spinouts playing excellent Rockabilly and Surf tunes at 3rd and 3rd.  While you’re there stop by Boston’s to hear Shakedown, Rogue Theory at the Bull Bar, ZBRA at the Hurricane, and John Yurt and the Westside Blues Band at Kevro’s!

Then it’s Penquim at Tim Finnegan’s on your way to Boca.  First stop there is the Funky Buddha to hear Mandy Moon and then Under the Willow and then Gypsy Lane at the Blue Martini.  Mizner Park is your next stop to hear Honey Henny Lime at the Dubliner before ending up at the Funky Biscuit for the John Kadlecik Band.

Looking for one last stop?  Then head west to the Turn 3 Sports Bar to hear Green Means Go rock on out until 2 am! 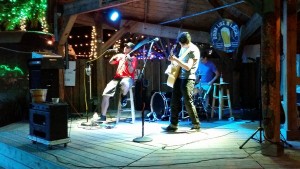